CANCER: The Emperor of all Maladies

Home/News/CANCER: The Emperor of all Maladies
Previous Next

CANCER: The Emperor of all Maladies

The Emperor of All Maladies by Siddhartha Mukherjee was one of the first books I read about cancer research, and it left a lasting impression on me. I read it around the time when I started my Co-op placement at BC Cancer last May, and not only is it well written, it also provides an integrative “biography” of cancer to the reader (would recommend!). I was fortunate enough to see him speak at the tail end of my Co-op placement, where he announced that his book was being made into a documentary. The way he views cancer is very unique, as a someone rather than a something, which I think inspires researchers to think of cancer as an ever evolving disease.
Who is Siddhartha Mukherjee?
Siddhartha Mukherjee  is an Indian-born American physician, scientist and writer best known for the 2010 book, The Emperor of All Maladies: A Biography of Cancer. The book was the basis of a 2015 film documentary, Can 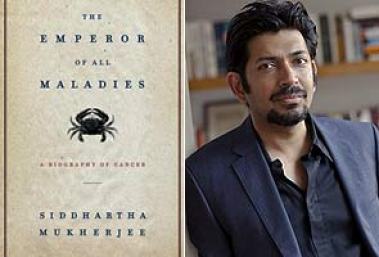 cer: The Emperor of All Maladies, by Ken Burns for PBS Television. For work on the book, Mukherjee won a Pulitzer Prize and an award from The Guardian. It was named one of the 100 most influential books written in English since 1923 by TIME
[3] and one of the 100 notable books of 2010 by The New York Times Magazine.
Cancer: The Emperor of All Maladies, a three-part documentary, adapted from Mukherjee’s “biography” and directed by veteran filmmaker Barak Goodman, airs on PBS (the US Public Broadcasting Service) starting 30 March. The book weaves together Mukherjee’s experiences as a hematology/oncology fellow at Massachusetts General Hospital as well as the history of cancer treatment and research. Mukherjee gives the history of cancer from its first identification 4,600 years ago by the Egyptian physician Imhotep. The Greeks had no understanding of cells, but they were familiar with hydraulics, so they used hydraulic metaphors, of humors, which were fluids whose proper balance, they believed, produced health and sickness. According to the book, cancer existed in silence in history until 440 BC, where the Greek historian Herodotus records the story of Atossa the queen of Persia and the daughter of Cyrus, who noticed a lump in her breast. The tumor was excised by her Greek slave named Demasitis, where the procedure is believed to be successful at least temporarily.
The most profound aspect of Burns’s visual rendering of Emperor of All Maladies is that it allows us to see the clarity that cancer research has brought about. We can now read the mutations of an oncogene, and look with astonishing precision at where a tumour has formed. In the last two years, as the series shows, work by Steven Rosenberg on T-cell therapy and James Allison on targeted tumor recognition has revealed how harnessing the immune system can combat cancers.
By admin|2015-04-06T10:24:17+05:30April 6th, 2015|Categories: News|0 Comments

About the Author: admin

This site uses Akismet to reduce spam. Learn how your comment data is processed.

We Can Deliver On Projects